Blog - Latest News
You are here: Home1 / Titanium Dioxide Tips2 / Why the price of China titanium dioxide rise up to the highest level of... 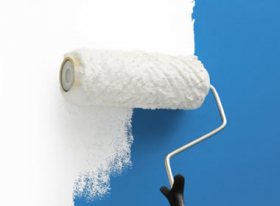 What is function of Titanium Dioxide in paint, ink and plastics?

What is latest situation of titanium dioxide production in China?

As per statistics, there are 41 full-process producers of titanium dioxide can maintain normal production across China and their output can reach 3.18 million tons, with a year-on-year increase of 7.69%.

How is the sharp increase of TIO2 price since Year 2020?

In 2020, the annual production capacity of titanium dioxide in China has reached 4,17 0,000tons. The largest producer in China Titanium Dioxide industry is Lomon Billion in terms of production capacity. In recent years, Lomon Billions has started the acquisition of small and medium-sized titanium dioxide companies with a total capacity over 1,000,000 tons and has occupied 24.22% of the total market share in China by 2020. The market share of CNNC ranks second in China, with a total output of 340,000tons, which accounts for 8.39% of the total market share. 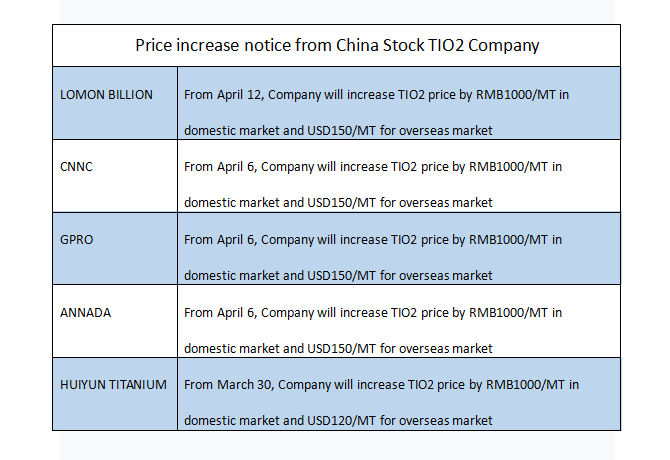 What are the main reasons for the price rising of Titanium Dioxide from China since 2020?

From the global TiO2 capacity perspective, the market share of global giant leaders has decreased and China TIO2 suppliers have speed up their seizing of overseas markets. Affected by the Covid 19, both sales and production of major global titanium dioxide manufacturers has declined. The sales growth rates of Tronox,Chemours, Venator and Kronos in the first year of 2020 were: -12%,+5%, -11% and -14% respectively. Chinese companies accelerated seizing of global market share of titanium dioxide. The supply of global TIO2 leaders will be still limited, and there is very less new titanium dioxide supply volume from China.

But with the gradual recovery of main global economies, the demand for TIO2 is going up. Also, both real estate in China and US are on the increasing side. So, it is expected that the total global demand on titanium dioxide will be higher than in 2020 by 7-8%. The intensity and sustainability of 2021 titanium dioxide boom is very optimistic.

Till currently, the price of titanium dioxide is around USD3100-3200 from different factories, and the production plan is till May and June. The price still remains high. The local demand from China and overseas demand keeps stable, most China suppliers of titanium dioxide are still positive with the price trend in Q3 and Q4 of 2021. Meanwhile, the environmental control in Shandong and Anhui province will make the supply still be short, and there is still price increase space in the coming months.

In addition to the factors of foreign demand and raw material increase, China’s production capacity upgrade is another major driving factor that has led to such a fierce price increase cycle for titanium dioxide.

In addition, from 2021 to 2023,there is almost no new global titanium dioxide capacity in other countries. Along with production line upgrade and supply reduction, the Matthew effect will be intensified globally.

What would be the price trend of China Titanium Dioxide for the Q2,Q3,Q4 of 2021?

From current supply and demand situation in China and abroad, the price would still be remaining on higher side. As the supply situation out of China is still in tight, with Covid-19 situation becomes more serious in some countries. And there would be new demand comes up after economy recovery from those countries with better control and vaccine taking. Let’s expect a more virtuous supply and demand circle in titanium dioxide industry and chemical industry.

What is Agriculture Adjuvants for Plants?
Scroll to top